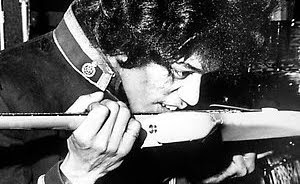 CD and vinyl package set for release next month

Recordings of Jimi Hendrix gigs from 1967 and 1968 in Paris and Ottowa are set to be released as part of a limited edition CD and vinyl package on January 25.
Recordings of his show in the Paris L'Olympia Theatre from January 29, 1968 and his gig at the Ottawa show at the Capitol Theater from March 19 of that year will feature on the CD in the package.
A recording of his show at the L'Olympia on October 9, 1967 will also feature. It was recorded for French radio and has not been released previously. Also included in the set will be a poster and postcard set, badges, an iPod skin, guitar picks and a T-shirt.